Greetings, readers ^__^ I am hosting the lovely Michelle Moore today for the start of her tour. She's a new and wonderful addition to LT3. Love her story, and awesome to work with. Onward!

Writing “Wishes” fell somewhere in between “write what you know” and “make up what you wish was real”.  In clearer language (since I write and all), it meant using some real places for inspiration, and then tweaking them up a little to fit my need.  Kind of like finding that perfect recipe for boeuf bourguignon, and replacing the red wine with hard cider.  Yeah, okay, so I’m no chef, I admit it.

The story takes place in the imaginary-but-should-be-real town of Playa Escondida in northeastern Florida.  It’s between Jacksonville and Daytona, about fifteen miles south of St. Augustine, or more specifically, south of Washington Oaks Gardens and north of Flagler Beach.  You know, if it really existed.

“But Michelle,” I’m sure you’re asking, “Now we know where the town is, but what about the coffee shop hinted at in your title?  What’s the inspiration for that?”

Direct your gaze below. 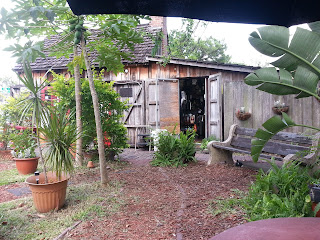 Welcome to Crucial Coffee of St. Augustine, the inspiration for Café D’Or.

I’ve been totally enchanted by Crucial Coffee since my first visit umpteen years ago, in the days before I even liked coffee.  I know, words of sacrilege there.  What can I say?  I was young, I was foolish, I hadn’t yet learned to love that magical bean.  The building itself was like something out of a novel… ancient, with dark corners and a wooden floor worn down with use, tropical gardens filled with fairy lights.  What more could you ask for in a setting? 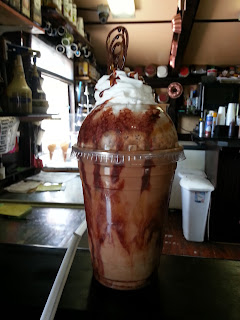 How about this?  A spectacularly stunning Milky Way Mocha, topped with a chocolate squiggly thing made fresh daily.  Okay, so maybe a drink isn’t actually a setting, but it sure adds to the ambiance.  And we’re just talking about how it looks.  I could write epic rhapsodies about how it tastes.

So there you have it.  Imaginary-but-should-be-real places inspired by places that are definitely worth a visit.  “If Wishes Were Coffee”, the story of a special little town in Florida where it’s never too late to find love. 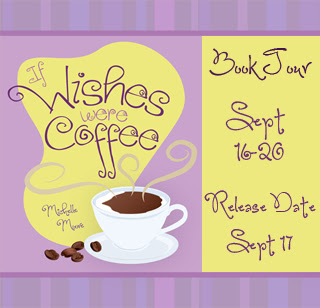 The second band of rain rolled in like a gray curtain, visibility dropping to less than a foot outside the door. The terracotta roof tiles amplified the sound of the downpour to a drumming roar that gave the espresso machine a run for its money, and Todd used it to cover a muttered "fuck" as he struggled to slide the door shut. It was the original one from when Café Oro had been a plantation summer kitchen, solid wood with hand-forged nails, mounted on an iron track, and a hundred pounds of heavy.
Rita's fear of change meant that once the sun was gone, the light in the shop was murky at best, the track lighting tucked up where the walls and roof met mostly hidden by bottles of syrup and the two gross of extra cups. She thought it added to the atmosphere. Todd thought it was setting them up for a trip and fall lawsuit, given the uneven brick floor. At least he knew enough to shuffle his feet when he walked.
"I love the lighting in here." The third girl (Tall-and blonde) waggled her fingers at him in a small wave. "It's really romantic. Do you do candles, too?"
Not the most subtle of questions, given the two candles on the table in front of her, samples of the ones for sale on the crowded shelves, tucked in with kitschy bits of seashell art and mugs from the local pottery. The two on the table had the least offensive smell of the bunch, though. Something called Sunset Waves, in a virulent shade of orange never seen in nature, and scented with fake citrus.
"Sure thing. Let me light those two on the table for you."
The rumble of the door sliding open interrupted his search for matches, and Todd glanced up with his first genuine grin of the afternoon. "Hey, make sure you close that thing behind you."
"Yeah, whatever. I don't work here." Daniel Connel, downstairs neighbor and poster child for the official beach bum society, laughed and flipped him off. "I'm a customer. That means I can do whatever I want." Never one to shirk on following through, he nodded to the trio in the chairs and wandered behind the counter, grabbing a cup with one hand and the coffee pot with the other.
Todd rolled his eyes. "Dude, you're going to get me fired. That whole not working here thing?" Finally coming up with the matches, inexplicably tucked in a tacky mermaid mug with a tail handle and prominent boobs, he missed Daniel's reply when he bent over to light the candles.
While the light might have been construed as romantic, the smell was anything but, an odd mixture of spoiled orange juice and industrial cleaner. Tall-and-blonde managed something that if not quite a smile, at least wasn't a grimace, and Todd felt impressed in spite of himself. If he'd been sitting inches away, instead of steadily tiptoeing away, gagging would've been on the agenda. 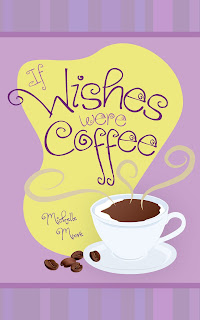 Todd and Daniel have been dancing around each other for almost a year, both afraid to take that step past ‘just friends’. Then Todd waits on a customer who introduces himself as Joshua, and leaves Todd a strange message in the form of a spell-infused coffee sleeve, gifting him with love at first sight. Their first sight long-since gone, Todd and Daniel both see the magical present as the potential end to any chance they have together.

Michelle Moore has a well-documented obsession with travel, television, frappaccinos and flamingos. These, however, come in a distant second to her love of writing. Most evenings she can be found huddled over her laptop at the local Starbucks, dividing her time between actually writing and pretending to be a barista. While Michelle would like to claim child prodigy status, the truth is that she’s only been scribbling words on paper since she was six. However, she’s moved beyond those initial Dick and Jane story knock-offs to slightly more adult topics (but not necessarily more mature characters).


Michelle has discovered that romance, her genre of choice, just so happens to do that peanut butter-n-chocolate thing with such varied flavors as science fiction, magical realism and historicals. No matter which mishmash she chooses, though, her style tends towards the sweet end of the spectrum.
at September 16, 2013