Release Day - Fighting for You 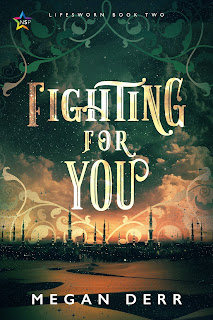 So Waiting for You was about Shanna, our marvelous queen-in-waiting, and her handsome men. But it also introduced Penli, her rather flamboyant best friend.

Two, Penli is one of my favorite character types - the flamboyant pretty boy who likes his pretty clothes and is a little bit vain, but could also kill you with his pinky if suitably provoked. He's been compared to Lord Akeldama, and that beloved vampire was definitely one inspiration.

He's also a former soldier (a former assassin) who just wants to be left in peace to recover and live a quiet life. Beneath his foppish clothes and cynical mien is a man worn to the bone who just wants to rest. I grew up in the military, that's why I write about soldiers a lot, and the fact they come home and so often are treated like criminals or garbage bothers me. So I write Penli and others, and hope they have some effect on the small slice of the world that reads them.

On a lighter note, he was great to write in that he doesn't want to be the hero, but can't help himself, how does he get himself into these situations??? And it was also fun to write his visceral hatred of Tishasanti, the way they'd both been completely bastards to each other over the years, sometimes justified, and sometimes not.

And of course, this book introduces the MC of the third book, Looking for You.

I hope everyone enjoys Penli and his boys. As ever, thanks for reading.

P.S. My newsletter died unexpectedly (mailchimp deactivated the account without bothering to tell me) so here is the new one if you want to sign up again.
at April 16, 2018