Wriggle & Sparkle: Be You

Once upon a time, I wrote a post (I no longer remember what it was about) and somewhere in there I made a flippant comment about how even if I wrote about a kraken shifter and a sparkly unicorn, it would still be a valid story (ah, I think it was a rant about how romance is awesome and people need to stop shitting on it, or something close to that).

And people said I should really write about the kraken and unicorn. So I did.

Right around the time I started writing, I read a post I have long since lost the link to, about how shifter fic never really pushes all that shifters could be capable of, especially when it comes to gender and such. Which gave me ideas.

Then there is Lynn, my kraken, one of my fav characters that I've written for several reasons. One, I always like the obnoxious ones. They resonate with me in a way other characters don't. But Lynn also is where I tried to push myself with what shifters are capable of.

Lynn's true form is a monster of the deep kraken the size of several tall office buildings. He wouldn't completely destroy  New York City, but he'd put a sizable dent in it. Now, shifters in general can pick the human form they want to shift into, and even change it later down the road. Lynn, however, is genderfluid and has the ability to shift into a cis-male or cis-female form whenever the hell he wants. His twin has the same ability since they're also genderfluid. Lynn can also shift into a half-form, where his upper half is human, but his bottom half is tentacles.

And let me tell you, the research for this has taught me more about how octopuses and squid fuck than I ever wanted to know. But his tentacles are not arbitrary or entirely made up, they were created based on what I read about octopuses and squid (he's got elements of both, since one or the other was not sufficient for my purposes).

But pushing myself to be more creative with shifters wasn't my only goal with this book. The obvious themes of W&S are gatekeeping, stereotypes, and just generally the needless difficulties and hurt caused by expecting people to meet the arbitrary rules of one group or another (Jader from my High Court series is another character on this theme). It's shitty to be told you're not really X because you don't look/behave/think A,B,C,D, and E. You're married to a man, you're not really a bisexual woman (or you're 'straight passing'). You don't look Jewish. You don't act Black. You're not really Latina. You don't look genderqueer. I never would have guessed you were a lesbian. Look at what he's wearing, obviously he's gay. And let's not forget how often trans people are abused, raped, and murdered for not 'passing' as suitably 'masculine' or 'feminine'.

I cannot tell you how much I hate dumb blonde jokes. The only time I ever found them funny was when my dad (or other family members) told them because I know my family does not see me as stupid simply because I'm blonde and have large breasts (my dad tells them to get a rise out of me, which is something he and I have always done with each other) But those stupid fucking jokes have done me, and a lot of other women, a lot of harm. Nowhere near the harm that has been done to all of the above groups, but it still hurts.

All my life people have presumed to tell me how they think I should behave, because I'm this, or that, because I did this, or am doing that. Without ever once considering how condescending and patronizing that is, that I'm adult who is very aware of my position in life and am capable of making my own decisions. I don't need anyone telling me how they think I should be living my life. It's mine, victories and losses, successes and failures, brilliant moments and grand stupidities and all. Outside of the small circle of people I trust to give me a reality check, people need to mind their own business. And this goes for everyone who does that shit to anyone else.

So Wriggle & Sparkle means a lot to me, partly because I think it's a solid collection of stories and I'm proud of my shifters, but mostly because at its core W&S is about two people who just want to be allowed to be themselves without being harassed or shamed. Who find in each other someone who accepts them exactly as they are, and loves them for better, worse, and all the rest. 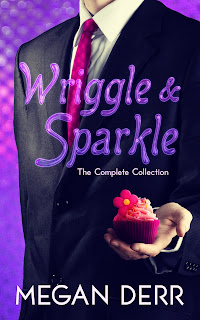 Lynn is a kraken shifter in every way: detailed, tenacious, resilient, and hard-working. Also possessive, vain, arrogant, and demanding. It makes him an excellent agent for the Federal Bureau of Paranormal Security and Investigation—and impossible to work with, as the long list of partners who have transferred away from him will attest.

His newest partner is a unicorn, possibly the worst type of paranormal for work that often turns ugly and violent. Everyone knows unicorns are too delicate for such things. Then Anderson proves to be a unicorn like no other, the kind of partner Lynn has always wanted—the kind of partner he wishes was more. But if there's one thing he's learned, it's that the only thing harder to keep than a partner is a lover.