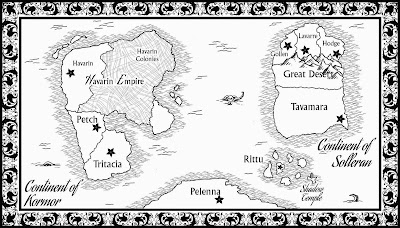 I have a penchant for pretty boys in jewelry and very little else. It's cropped up in basically any story where I could possibly get away with it. I love poly, and above all else I like taking something that frustrates me and writing it in a way that doesn't frustrate me.

Regarding all of Tavamara verse, I was provoked by two things: Slave fic is a squick for me, and I got really tired of stories where a man was dragged into a king's harem, which was all women, in a country where homosexuality was wrong, and no one ever seemed to take issue (or The Bad Guy takes issue and once he's been taken care of everything goes back to being fine). It's sloppy world building.

So I wanted to create a world where sexual servants were an important part of the culture, but they weren't slaves. I wanted a society, too, where homosexuality wasn't an issue. 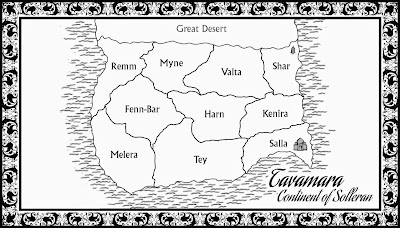 In fact, I wound up with a culture where bisexuality is common (and even expected to a degree, for good and bad, since no culture is perfect), where the greatest taboo is having children out of marriage (and therefore men and women do not sleep with each other before marriage) and so the culture developed a practice of same sex lovers while unattached.  Only the royal family are allowed to retain lovers after marriage, a sign of their status and power.

But also, and most importantly, an indication of their right and worthiness to rule, since concubines willingly and happily surrender their lives to serve and will do so until the monarch they've sworn themselves to dies. A monarch without concubines isn't to be trusted (and royals have been passed over in Tavamara's history for this reason). They have a long history with the priesthood, and it's considered one of the greatest honors in the kingdom.

It's always been very, very important to me that they do it willingly, that they're not slaves (and I definitely very much on purpose made one of their greatest enemies an enormous empire whose wealth is built on slavery).

I have no problem with people who write/read/enjoy slave fic, I will fight anyone who tries to come down on them. But it's a hard limit for me, and I wanted to write a story that had concubines and sexual service, submission and devotion and power plays, that didn't include slavery and rape and violence.

The King's Harem was a good start, and Sandstorm is the kind of adventurous romp that I love. But The Harem Master is definitely the one I'm proudest of so far. It takes place several generations before the other two, and many of the harem traditions in the first two are in fact established in THM.

Though Demir and his relationship with Ihsan and his harem are the main focus of the story, I was supremely happy I also finally got to include a princess and her harem. I've always put it off because women get treated horribly in M/M fiction, and like so many authors I didn't want to make readers angry and stop reading. But I'm really past done with sacrificing my own happiness and ideas for people who think that it's ever okay to hate on women. So you get a harem master, a prince, a princess, and all the people who love them.

And I'm not going to lie, one of my crowning moments is that my mom finally broke down and gave the Tavamara books a chance and she went from not really getting poly to demanding when the fuck I'm writing the next one, stop slacking Megan April Derr.

All my love to those who read it as a serial. I have a penchant for cliffhangers that stressed a few people out :3 So I'm grateful no one has actually killed me yet. I hope all those who have been patiently waiting for the ebook, and those who are taking a chance on something new, enjoy it. 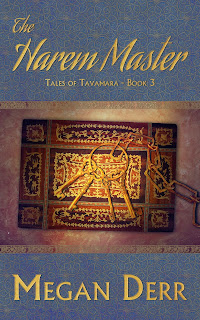 Lord Demir has spent his life trying to appease a brutal, selfish king, and keep the concubines under his care alive—and now he is on the verge of losing everything. The council wants to abolish the harems, there are no heirs to the throne, and the foreigners control the Steward. One wrong move will tip tensions into civil war.
Crown Prince Ihsan returns to find his home in turmoil, and the royal court so full of vipers it's impossible to say which of them will strike first. Removing his father from the throne, one way or another, should be a simple matter. Staying alive and proving himself a worthy king will be far more difficult.
Crown Princess Euren has spent the last five years in hiding so that she could not be used against her father or Ihsan. But she is the daughter of a soldier, never meant to wear a crown, never trained to fight battles where words are the weapon of choice. If she hopes to keep herself and her loved ones alive, she'll have to learn fast.